I am not going to pave the jungle for you. Put on some boots.
— Van Jones

The Dangers of Victimhood

It is much more psychologically appropriate to assume that you are the enemy – that it is your weakness and insufficiencies that are damaging the world – than to assume saint-like goodness on the part of you and your party and to pursue an enemy you are inclined to see everywhere.
— Jordan B. Peterson

As much of Peterson’s work, it’s important but not easy. And the stories of the Dekulakization and the Holodomor should be told and never forgotten, no matter how horrible they are.

Strategy without tactics is the slowest route to victory. Tactics without strategy is the noise before defeat.
— Sun Tzu

We chose this solution and it is bad

We have chosen rising cost of energy with rising CO₂ emissions while telling ourselves that we were making a different choice.

Germany and California have prioritized closing nuclear plants over decommissioning coal and gas plants. But with so much power still generated from fossil fuels, rapid declines in the cost of wind and solar have not translated into cheap electricity. Electricity prices, in fact, have tended to be highest in places with the greatest share of renewable energy. Public resistance to the growing land use impacts of renewable energy has further hobbled efforts to build out renewables and the infrastructure necessary to support them.

One might dismiss these inconvenient developments as hiccups in the early phases of a global energy transition. But in many ways, the early phases are the easiest: Wind and solar developers can cherry-pick the best locations with good access to existing transmission lines. There is a huge reservoir of existing, on-demand, fossil fuel power generation that can supply the lion’s share of electricity demand while also filling in for renewable energy sources when the sun doesn’t shine and wind doesn’t blow. Subsidies for renewable energy are manageable for taxpayers and electricity consumers as long as the share of wind and solar supplying the grid isn’t very high.

But as the share of renewable energy grows in places like California and Germany, the technical challenges associated with scaling up renewables become more difficult. Once the share of variable renewable energy (i.e., solar and wind) begins to approach 20 percent or so, it swamps the electrical grid whenever the sun is shining and the wind is blowing. Surges of wind and solar power at particular times of the day not only undermine the economics of other power sources on the grid but also undermine the economics of adding additional wind and solar. This phenomenon, called value deflation, is already eroding the economics of wind and solar in California and elsewhere—even at relatively low shares of grid penetration.
— Ted Nordhaus, “In Global Energy Crisis, Anti-Nuclear Chickens Come Home to Roost“

The inherent problem here is that we have told ourselves that variable renewable energy – solar, wind and hydro – are a viable alternative for energy production, but in reality they are not. The energy density is too low, the costs are too high, and as we are beginning to find out, the production of the equipment is anything but environmentally safe.

The need to fill the hole left by the nation’s shuttered nuclear plants and back up growing wind and solar generation has forced Germany to become even more dependent on domestically produced (and extremely carbon-intensive) lignite coal and Russian natural gas, resulting in largely stagnant—and lately rising—emissions. The former has forced the nation to delay its climate ambitions. The latter has left Germany’s economy and citizenry vulnerable to price gouging and blackmail.

Belgium, bowing to pressure from the country’s Green parties, is moving forward with plans to retire its nuclear power plants by 2025 without so much as a pretense of replacing them with clean generation. Instead, it will subsidize construction of new natural gas plants.

Did anyone notice, years ago when people were still traveling by air how airports, these hubs of travel for the most influential people in the world, were covered in ads touting solar and wind energy by the same companies advertising their natural gas? There is a reason they did so:

But as experts and modelers have worked the problem over recent years, they have discovered that it is extremely difficult to cost-effectively run a grid with variable renewable energy without complementing it with technologies they’ve dubbed “clean firm generation.” To the untrained eye, many of the leading candidates for clean firm generation look a lot like the things that provide baseload power today: coal, natural gas, and nuclear energy. The difference is that in the models, these baseload plants would not run constantly as in the past but mostly sit idle, ramping up and down in response to the vagaries of the wind and the sun. In the case of coal and gas plants, they would also capture all their carbon.

In theory, nuclear, coal, and gas are all capable of playing this role. In practice, nuclear and coal are not terribly well suited to doing so. Both have huge upfront capital costs and significant operating costs that must be maintained whether they are burning fuel or not. In their present iterations at least, they are only economically viable when they operate most of the time.

Gas, though, is a different animal. Gas plants are cheap to build and easy to operate highly variably. Indeed, natural gas first gained a foothold in electrical systems for precisely this characteristic, as a generation source that was intended primarily to operate intermittently, in addition to baseload power generation during periods of peak demand. Little wonder, then, that the great expansion of wind and solar in the electrical systems of advanced developed economies has been accompanied by the expansion of gas, even in places where it has remained relatively expensive. Gas turns out to be the killer app for scaling renewable energy. The problem is that it isn’t clean and, in most of the world, it’s also not cheap.

I am not saying we shouldn’t have variable renewable energy sources. But I am saying that we should be honest about what it means and how to solve the issues that it presents.

In virtually every country that has closed nuclear plants, clean electricity has been replaced with dirty power.

This matches me and most of the people I know: There’s a statistically significant correlation between the big five personality traits and book preferences, as described in “Predicting Personality from Book Preferences with User-Generated Content Labels“.

The big five are extraversion, agreeableness, openness, neuroticism and conscientiousness. Apparently people high in openness like philosophical novels, while conscientious people like history or books on leadership. Introverted people like fantasy and science fiction (that’s a stereotype right there!) while extroverts like memoirs. 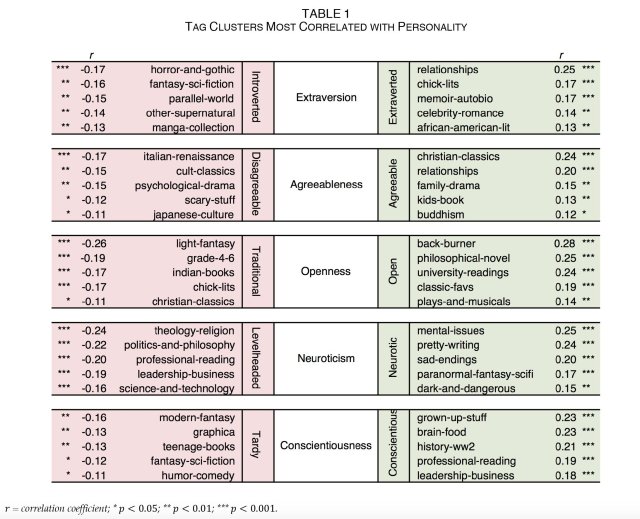 The important bit is not the most obvious one

By now many will have seen an image like this, showing the difference between professional reviewers and actual audiences: 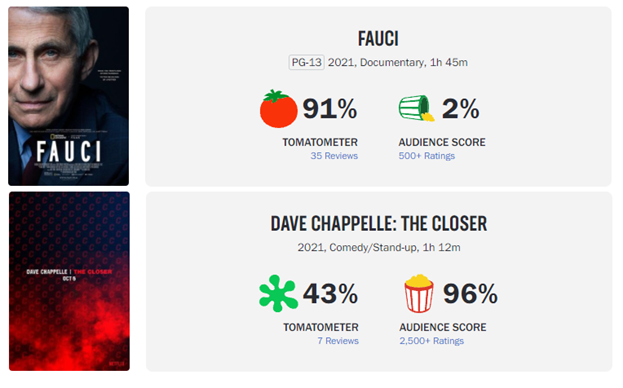 I think the audience score for the “Fauci” documentary is more or less politically motivated, by people very angry with the policies Anthony Fauci stands for partly because he lied and partly because of the dire situation the American health care system is in.

Meanwhile Dave Chappelle has, like with his “Sticks & Stones” special, made a very funny show. It is also one that pokes fun at the upper class woke politics and people are beginning to find that funny now.

The important bit is this:

Only 7 professional reviewers have published a review of Chapelle’s show. They are flocking to review the “Fauci” documentary which only a few will watch but are too scared to review the popular Chapelle show. Because it makes fun of wokeness.

A few years ago Netflix might have pulled the Chapelle show because of the woke backlash but today they don’t care. Even a protest walkout does nothing.

Maybe the tide is finally turning.

Meanwhile, enjoy the Chapelle show. Like “Sticks & Stones”, “The Closer” is very funny.

I’d do this too

Dave Kellett rewrote William Carlos Williams’ old poem for the modern day – click on the image to read the rest:

The picture that we see emerging instead is one of two functionally distinct systems: one to navigate intimate relationships and the other to navigate social hierarchies, both of which matter for how we perceive and treat others in the world.
— Thomas Kleppestø

It appears that we cannot extrapolate from one to the other.

Another reminder of the Al Capone theory of sexual harassment

In the original form this is used to suggest a way to spot people abusing their position in your organisation. But a recent story in Denmark shows that when you have 3 known, fairly mild, cases of sexual harassment worse is still to come.

The Danish case should be taught at every business school and every company board should be aware of it.

The short version of the story, so far, is that the CEO harassed women in the company for years. It finally came to a head and all the middle managers complained to the board. The board set out to get the facts specific to the complaint straight and found that the CEO had harassed the women, paid a compensation to the women … and kept the CEO.

This send a message to everyone, inside the company and out, that the behaviour of the CEO was forgivable.

It also send a message to everyone working in any company having the same board members as this company, that such behaviour would be forgiven.

And finally according to the theory above there would be more. And there were.

The CEO was asked to leave when media got wind of the story. The board is now gone as well, but I’ll still remind everyone: They thought it was forgivable.

If you want to look at a bright spot in this, at least one of the largest shareholders in the company decided that the chairman of the board was unfit to serve in their other boards.

This is strictly a commercial project, nothing political in it” — every German official for 10 years.

So, did EU just put ourselves in a position where we can be forced to accept a foreign government’s acts to destabilise our societies, assassinations and fraud? Yes, we did.

Without supply security you do not have national security.

Vladimir Chizov, Russia’s permanent representative to the EU, said he expected Gazprom, the state-controlled exporter that supplies 35 per cent of European gas needs, to respond swiftly to instructions from president Vladimir Putin to adjust output.

While rejecting assertions from European lawmakers that Russia had played a role in Europe’s gas crunch, Chizov said Europe’s choice to treat Moscow as a geopolitical “adversary” had not helped.
— “Moscow’s EU envoy urges Europe to fix ties to avoid gas shortages“

And as we keep relying on fossil fuels, there’s a coal shortage: