Neil Young and something about rocks and glass houses

I’ll be honest: I consider “artists” in favour of cancel culture and stifling free speech more like vampires than artists, sucking value from their environment. So right now, Neil Young isn’t a favourite of mine.

I thought of listing all the problems of Young taking this self-righteous stance on “disinformation” and having looked at it a bit, it seems that I will probably not even be able to cover everything. Young should really have been the last one to talk about disinformation but here we are.

Young wants Rogan off Spotify and is joined by a number of other has-beens and a couple of more recent creators. Why? Because Rogan is “spreading disinformation about the COVID-19 disease, treatments, and vaccines”. This is technically true, like when Rogan had Robert Malone on as a guest, but if that’s enough then what about all the main stream news channels that had Anthony Fauci on in the beginning of the pandemic talking about masks? Back then Fauci said they were unnecessary but he has admitted later that it was a lie. He believed he has a good reason to lie but it was a direct lie told to the public.

This lie by Fauci, where he wanted to save some specific lives at the cost of some less specific lives, also laid the foundation for the whole problem of disinformation in the pandemic. Everyone knows he lied so why should anyone trust him, ever?

That was one example of mass media spreading disinformation and I could point to hundreds of examples: Hunter Biden. Kyle Rittenhouse. Kamloops mass grave. Jussie Smollett. Wi Spa. The current protests in Ottawa. Yes, it’s a problem. Rogan is nothing compared to the “professionals”.

And when the “professionals” try to take down Rogan they can’t even get their fact checks right.

It took less than a day for someone to point out how Young during the AIDS epidemic talked about homosexuals. Of course, you could choose to reframe this as a mistake and homophobia as a right-wing issue, even if you have proof of neither: 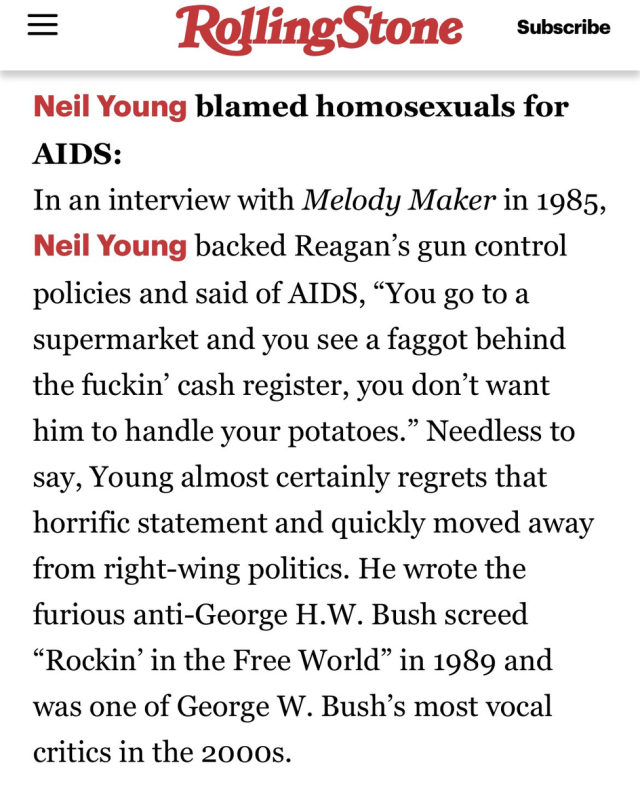 As Edie Wyatt recently implied, the same kind of people that turned on the homosexuals during the AIDS epidemic would today turn on the unvaccinated. I don’t think anyone expected it to be the exact same people.

Young was part of what became the anti-vax movement

Granted, while I’ve heard some songs by Young I am not well-versed in his catalogue. Should I have been surprised that he is also anti-GMO? The anti-scientific anti-GMO movement later sprouted the anti-vax movement that merged with the fraudulent measles vaccine hoax, and the same anti-scientific reasoning lies at the heart of both.

It hardly makes it better that Young is presumably fine with the GMO that keeps him alive while the GMO that could have saved millions of lives in developing countries is for some reason bad and evil.

Keep on rockin’ in the free world

Spotify is bad, Amazon and Apple are good? I mean, working conditions at Amazon warehouses are famous but not for good things. There’s always more by the way. And Apple. Really? Well, I guess Uyghurs are just muslims so maybe they don’t count?

Again, maybe the whole point isn’t actually what is true or good but rather about something else. Maybe it’s just about Neil Young.

And, likely, so on

That was what I found, barely looking for it, so I am pretty sure there is more. I have little interest in looking for more and I expect that I will listen no more and no less to Neil Young as I did before.

I’ll probably listen to another of Rogan’s shows.

I’ll end this linking to a couple of articles relevant to this:

Hamish McKenzie, Chris Best, and Jairaj Sethi: “Society has a trust problem. More censorship will only make it worse.”