The O’Reilly conferences were good 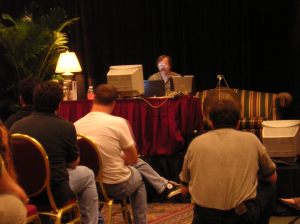 Starting in 1998 and all the way through to 2009, just skipping 2008 for personal reasons, I had the opportunity to go to an O’Reilly conference every year. It started with the Perl Conference and then the Open Source Convention, OSCON, after that. They were very good conferences, with tutorials before the main conference, great tracks starting with interesting keynotes – that weren’t just marketing-events,  and also great networking opportunities after hours.

I learned about software security, XML/XSLT, API reliance and how I had misjudged Javascript.

I finally got to understand object oriented programming.

I also got to spend a couple of days extra every time and one year, in 2003, I met Wil Wheaton (during the conference days) and Ursula K. Le Guin (after the conference – she was probably unaware of it). They year before I met Aaron Schwartz and I also met a future Taiwanese minister, but I can’t remember what year that was – she was presenting a very useful tool she’d developed for Perl.

I’ve hoped to be able to return some day for the conferences, for professional purposes, as I know that I became a better developer because of them.

And now it is too late.

I don’t know if online variants of the conferences will have the same impact, but I suppose I can hope so. I will.