I don’t think stricter gun control will solve the issues of violence in USA, but despite everything they might remove some of the consequences of those issues. 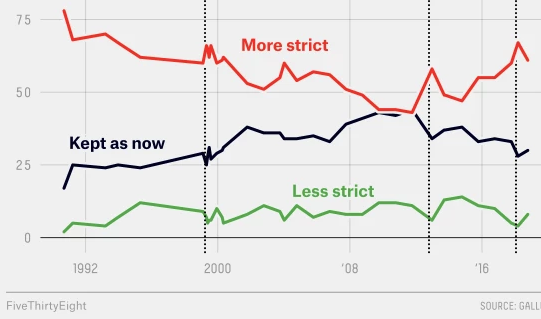 There are actually signs that it might become politically possible to enact stricter gun control laws over there – signs that point to greater support for stricter laws, though not as great as in the 1990’s, and a greater importance put on such restrictions.

Looking around the world guns doesn’t seem to be the actual, underlying, problem but restricting access would definitely bring about a change. I am not arguing for no gun control – on the contrary – but I think you need to look at the root cause if you want to solve a problem.

I think I am making my point too convoluted; guns are linked to gun deaths, in fact FBI and CDC statistics appear to show that the simple way to lower gun deaths is to restrict access to guns. My point is that while mass shootings in USA is on the rise, killing more people than before, violence and murders in USA are on the decline.

Looking at the rate of violence in USA (and the rest of the world) these mass-shootings begin to feel even more out of place. I knew that 1970-1990 were bad in USA but I thought from headlines we were returning to those days. We are not. The general trend is still down and down; less violence and fewer murders every year. The mass-shootings are outliers in relation to murders; they are caused by something else. I think I know what and I do not see USA as able to fix that.

This entry was posted in Other and tagged guns, politics, usa, violence. Bookmark the permalink.